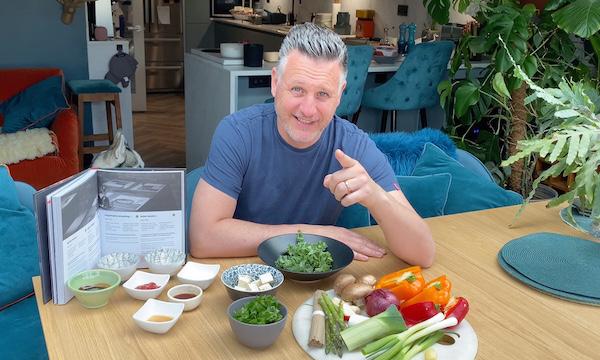 EXCLUSIVE: How Wagamama's online cooking lessons kept them on top of customers' minds

QSR Media talks to executive chef Steve Mangleshot about working on Wok from Home, and what’s in store for Veganuary.

Over 10 million people have watched Wagamama’s wok from home cooking series since launching at the start of the first lockdown.

That number is expected to rise, with the brand having just launched its second edition, catering this time to those stuck at home due to the second lockdown.

Executive chef and creative director of menu innovation Steve Mangleshot serves as the face of the videos, now featuring Wagamama superfans learning along the way via Whatsapp.

In an exclusive interview with QSR Media, he revealed he was surprised with how much traction the videos had gotten.

Unsurprisingly, Steve’s videos on making katsu were the more successful ones for the pan-Asian brand. Developed by Steve along with four others, the series has also been a family affair, with wife Claire behind the camera in their home kitchen.

All their cooking videos have also proved to be a potent marketing tool for the brand, which continued to experience queues of people in certain outlets compared to other restaurant chains.

"It kept us relevant, it kept us in peoples' minds when everyone else was on hard lockdown. We couldn't have timed it any better,” he said, also attributing their success to past cookbooks and managers that are ensuring their restaurants are complying with government regulations.

Steve also revealed that they have opted to reduce their menu options, opting to “be more sensible” due to COVID-19 restrictions and have more “breathing room” for the chefs who are working inside of their kitchens. He hopes to go back to Wagamama’s usual pace of showcasing new items after the lockdown, teasing the arrival of new dishes for Veganuary.

Their supply chain was also managed, he added, stressing “a lot of communication” with both suppliers and chefs as an important part of navigating the second lockdown, having learned from their four-week temporary closures in March.

“It was almost like starting a restaurant business from scratch,” he recalled.

Off-premise services are also doing well for the brand, with Steve expressing optimism about the future of their restaurants.

“Compared to last time, it doesn’t seem so ‘doom-and-gloom’. It doesn’t feel so wretched and down. We see there is light at the end of the tunnel,” he said. “I think we’re doing okay compared to some of the other brands who are really finding it tough.”