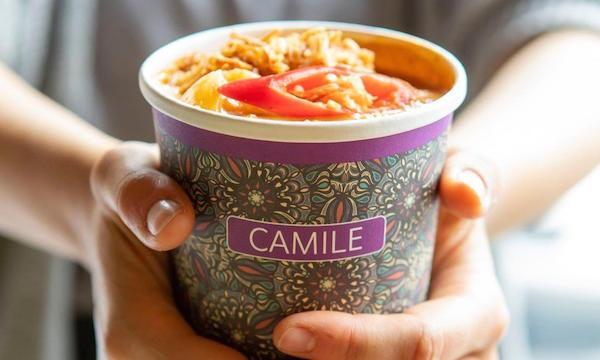 Brody Sweeney talks to QSR Media about their suburban-based model, his views on drone delivery and how sales are 35% ahead during the pandemic.

Dark or cloud kitchens, where food is prepared at separate takeaway premises rather than a restaurant, are in the works at Camile Thai Kitchen, the chain’s CEO told QSR Media.

“Our cloud kitchen in Bermondsey is performing really well, because it's close to where we have an existing Camile presence in Barnes, Battersea, Clapham and Tooting,” Sweeney explained. A dark kitchen in Canary Wharf is also planned in September, which he describes as a “unique situation.”

Camile Thai currently has over 30 locations in London and Ireland, and more than 10 years’ experience in home delivery and collection via their namesake app. At the moment, the business is actively seeking new locations for their franchisees in London and surrounding areas.

In Ireland, they launched a white label kitchen franchise model for hotels, bars and restaurants to re-open and are currently assessing strategic partners in the UK for their low capex franchise model re-tooling and converting existing kitchen spaces to deliver Camile Thai. The first conversion franchise in Ireland is taking over €30,000 per week.

Sweeney revealed their like for like sales in London grew by over 35% in 2020 – during the pandemic, explaining that the business found success for being “primarily suburban-based” and for focusing on home delivery - sales being 70% off-premise.

“We have noticed a kind of revival of the suburban villages in London, where people are spending time - so there is more business for local hairdressers and cafes and businesses like ourselves. And then the central business districts, which are traditionally the most expensive locations with high footfall, are very difficult.”

Sweeney does not see the situation changing in CBDs in the next 12 months but thinks businesses predominantly situated in those areas can be “saved” by turnover-based rent mechanisms.

“That's certainly the solution for the restaurant sector, not necessarily so much for the landlord sector because of course, they have their own issues,” he said. “There are business opportunities coming out of this and driving new ways of doing things. The population of the UK hasn't changed and the amount of food people are going to eat hasn't changed. So it's smart companies, finding innovative ways of finding and serving those hungry people who will do well.”

Sweeney said they were also fortunate they did not have to fundamentally change how their business operated when restrictions were put in place.

“We realised speed is really important. Obviously, we could not accommodate dine-in guests for a period of time. But we've found that the delivery side of the business more than compensates for this ” he said.

Earlier this year, it was announced that Camile would launch drone deliveries with entrepreneur Bobby Healy’s drone start-up Manna, which they have been trialling in Ireland for about six months. Customers will be able to use Google Earth technology to set a delivery point, where meals will descend on a biodegradable string from an automated drone capable of travelling at 80 kph. Those plans, which require clearance from the aviation regulator, have been derailed by the pandemic as Manna shifted its resources to trial prescription deliveries by drone for the NHS.

Sweeney expects to deliver his first meal by air next year. “The drones are absolutely no-brainers from a business point of view,” he says. "The cost of delivery will be halved, customers will get their orders more quickly, and the service ticks Camile’s sustainability box."

“On every level, that's a win. Consumers will love it, we love it as operators, I think the Deliveroos, Just Eats and Uber Eats will absolutely love it as well,” he added.

He also sees robotics as an opportunity for chains to pursue.

“That will only be ramped up and done more quickly because of the pandemic as businesses improve their models,” he said. “Typically a restaurant will be operating labor costs at around 25%. We think it's totally feasible that this 25% could become 20% with robotics.”