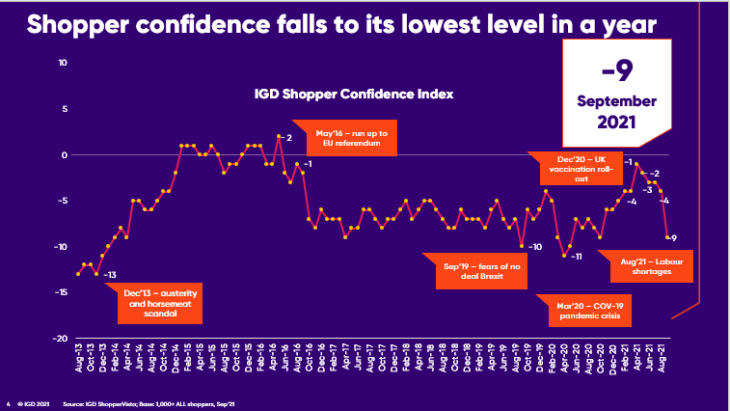 21% of shoppers expect to focus more on saving money rather than quality next year.

Shopper confidence has fallen to its lowest level in a year, according to the IGD’s latest Shopper Confidence Index.

The September 2021 Shopper Confidence Index from ShopperVista sees 85% of shoppers expecting food prices to get more expensive next year, compared to vs 79% in August 2021.

Following a small but consistent decline for the last four months, shopper confidence fell to -9 score compared to -4 in August, which is its largest recorded monthly decline.

Confidence declined steadily throughout September and fell to a -14 score at the end of the month.

Overall, financial confidence also fell sharply in the last month with 31% of shoppers expecting to be worse off in the year ahead, a 9% increase compared to August.

The decline in confidence was across all shopper demographics, but more so among lower income households.

21% of shoppers expect to focus more on saving money rather than quality next year, which is a 6% increase from August 2021.

“Moving forward, shopper focus will be on value for money and we will see much wider adoption of the 2021 “Savvy shopping” trend as shoppers look to save money, with many switching to private label products, motivated by seeking out savings,” Simon Wainwright, Director of Global Insight at IGD.

“The discount channel is forecast to be the fastest-growing grocery channel over the next five years and we will see many shoppers shift their shopping behaviour to make cost-savings from this channel.”

“Shopper confidence will remain very fragile for the foreseeable future so retailers and suppliers will need to focus on building loyalty by supporting their customers’ needs by offering value for money,” he added.