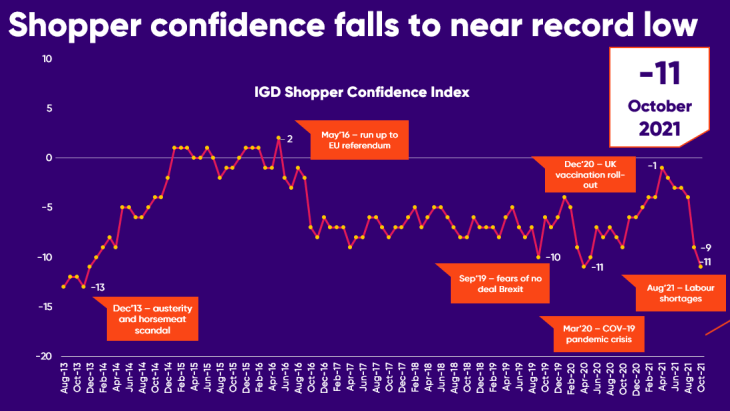 Shopper confidence has fallen anew in October as concerns around food price inflation are at elevated levels, according to new data from IGD.

The insights agency’s Shopper Confidence Index for the month has fallen to its second lowest level since it was first measured, following a decline in five out of the last six months.

84% of shoppers expect food and grocery prices to increase in the year ahead and 28%, a record for the Index, expect them to get “much more” expensive.

Overall, financial confidence has declined with 34% of shoppers expecting to be worse off in the year ahead, up 3% on last month. Confidence has also declined across all income groups but particularly amongst lower income households.

Shoppers are increasingly focusing on saving money, with 26% expected (versus 11% last April) to focus more on saving money in the year ahead, the highest level recorded in six years.

Shopper confidence is declining across most age groups, but particularly amongst 25-34s and those aged 45 and over, with more high-income households believing they will be worse off (31%), than better off (20%) in the year ahead.

“It comes as no surprise that shopper confidence has decreased once again, following the steady decline we’ve seen in recent months.  It paints a bleak picture for the winter and shoppers will remain highly sensitive to price rises and news relating to availability.  With labour supply stretched thin and declining confidence, the Christmas trading period is likely to be a challenging time,” said Simon Wainwright, director of global insight at IGD.

“While some households will look for ways to trade-up this Christmas to compensate missing out on last year, “savvy shopping” will become increasingly prevalent. People will shop around to get the best deals and private label products will grow in popularity.  Value will be top of shoppers’ minds for the foreseeable future,” he added.